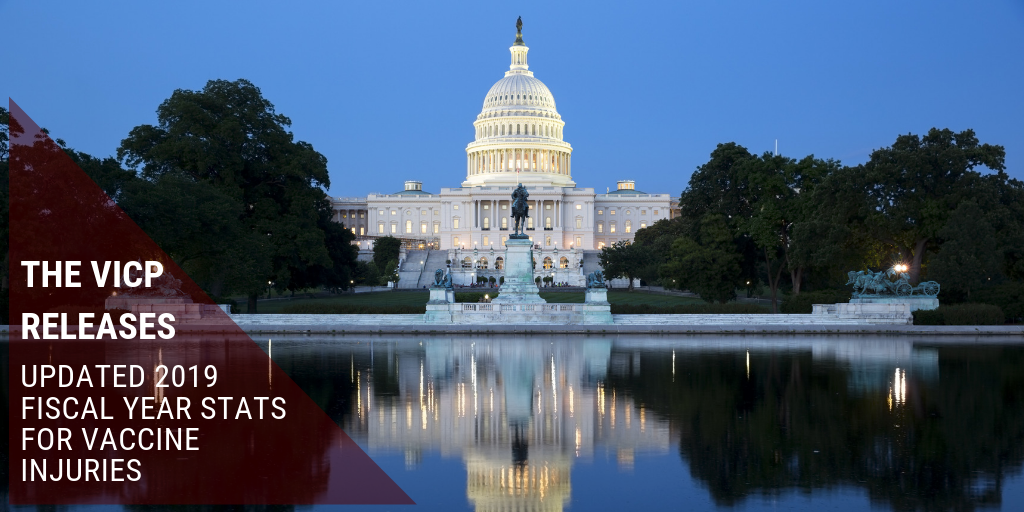 Updated on April 1st, the National Vaccine Injury Program released their injury and compensation data from 1989 through to the 2019 fiscal year. On average, a petition is not settled until two to three years from its filing, meaning that it is highly unlikely for a petition to be adjudicated in the same fiscal year. The 2019 FY has compensated 276 Petitioner’s so far - totaling in $119,344,851.56 worth of awards being paid out to Petitioner’s across the United States. You can also see updated 2018 FY statistics here.

Historically, the VICP has compensated Petitioner’s the most for injuries and or adverse reactions from the influenza vaccine, DTaP (“Diphtheria, Tetanus, and Pertussis”) vaccine, followed by the MMR (“Measles, Mumps, and Rubella”) vaccine since 1988. A total of 20,522 petitions have been filed in the VICP since the Reagan Administration spearheaded the creation of the National Childhood Vaccine Injury Act. It is important to note that just because compensation was awarded, it does not always mean a vaccine definitively caused a Petitioner’s injury. In fact, the VICP contends that 70% of total compensation is produced out of a negotiated settlement between the Petitioner and Health and Human Services (“HHS”) upon review of the evidence which allegedly caused the injury and or adverse reaction.

Our founding partners Max Muller and Paul Brazil have both been featured on numerous NBC and CBS news stories discussing the VICP, frequency of vaccine injury, SIRVA following a flu shot (among others), and the ongoing Zostavax shingles lawsuit against its manufacturer Merck. The team of vaccine injury lawyers here at MVL have represented over 1,500 clients nationwide for all types of injuries following vaccines covered under the Vaccine Injury Compensation Program. In addition, My Vaccine Lawyer has won over $25 million for clients since 2017.

If you want to learn more about how the Vaccine Injury Compensation Program works, below are a few infographics from their site which help explain the process and structure of the program:

In literal terms, the flu season is an annually (yearly) recurring period of time that is...

The 2018-2019 Flu Season is quickly approaching. While it is not possible to predict what this flu...